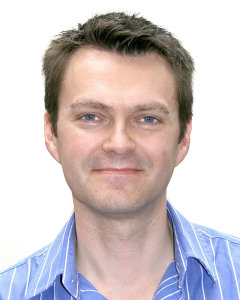 Simon McIntosh-Smith received a BSc in Computer Science from the University of Cardiff in 1991, graduating as valedictorian. He then became a microprocessor architect at Inmos and STMicroelectronics, before co-designing the world’s first fully programmable GPU at Pixelfusion in 1999. In 2002 he co-founded ClearSpeed Technology where, as Director of Architecture and Applications, he co-developed the first modern many-core HPC accelerators. In 2003 he led the development of the first accelerated BLAS/LAPACK and FFT libraries leading to the first modern accelerated Top500 system, TSUBAME-1.0 at Tokyo Tech in 2006. He now leads the Microelectronics Research Group at the University of Bristol, UK. In 2013 he was a joint recipient of an R&D 100 award for his contribution to Sandia’s Mantevo benchmark suite. In 2014 he was awarded the first Intel Parallel Computing Center in the UK. McIntosh-Smith actively contributes to the Khronos OpenCL heterogeneous many-core programming standard. He is a member of the EU-funded FP7 Mont Blanc Exascale project, and the European Exascale Software Initiative (EESI), sits on PRACE panels, chairs the International Workshop on OpenCL (IWOCL), and sits on the program committees for SC, ISC and HiPEAC.